MONTEREY, CA (September 11, 2021) – Team TGM experienced nothing short of a rollercoaster day at WeatherTech RacewayLaguna Seca. The team ran into several unexpected mechanical issues and were victims of an on-track shunt from another competitor; however, it was an exceptional performance by the crew that made for an exciting day and strong finish.

The two-car Chevy Camaro team finished 11th and 17th after running near the front and as high as third during the 2-hour race. But late unplanned pit stops for fuel and tire issues undid the great work the Team TGM pit crew put in to leapfrog the cars up several positions on every other stop.

“This weekend was tough, but the team put in a great effort, as always, and although we struggled a bit with performance, the crew was unmatched on pit lane,” said TGM owner, Ted Giovanis.

“We knew going in that we were at a bit of a disadvantage in not having tested at Laguna and being our first time on this circuit with the Chevy Camaros. 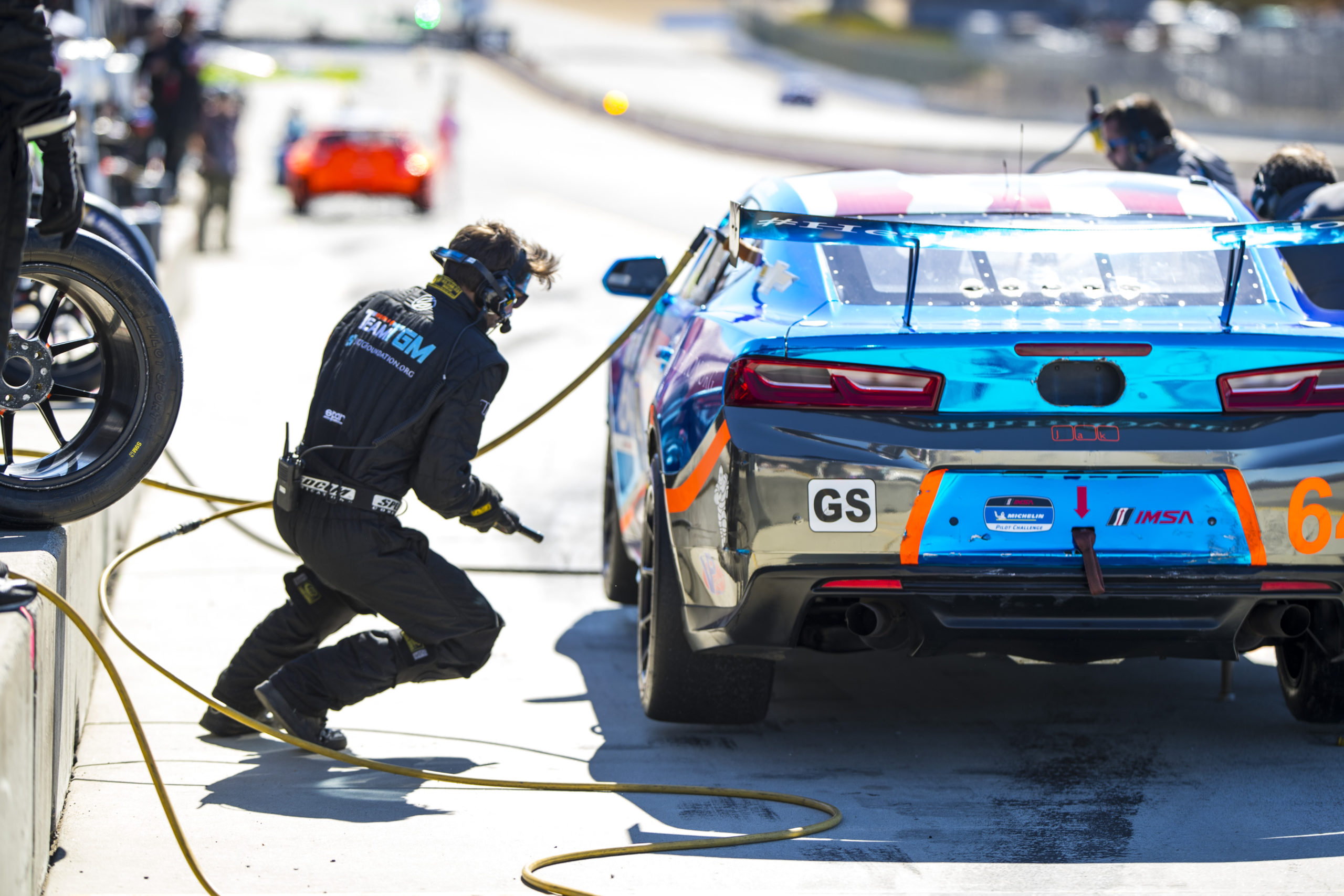 “It was clear after qualifying and really pushing as hard as we could that we were going to be off the pace of the leaders. Joe Varde had a strategy for managing the tire wear, and we all pushed as much as possible on track, but every time we felt we were getting ahead, we’d encounter an unexpected challenge.

“The entire team put in a great effort. This is not what we wanted after having great team success here in previous years, but it was what we had today. We have an awesome team, and we proved that racing really is a team sport.”

Laguna Seca marked the eighth event in the ten-race season of the IMSA Michelin Pilot Challenge. Next on the calendar is VIRginia International Raceway in one month’s time on October 8-10.

“The race went pretty well, not quite as well as we had wanted, but we got two cars that are reasonably in one piece, and we made it through. We had a few problems but all in all it was a good day for the team. The cars still need some help in a couple of areas, handling, and performance. We just need to turn the page and go onto the next race, which is a VIR. Hopefully, we’ll repeat the success we’ve had there.”

“First of all, I have to give a shout out to the boys. We had great pit stops; they were awesome for both cars. Once again, we got on the lead lap but just didn’t get the caution flag we could have used and eventually had to come back in for a late splash of fuel. We gained a bunch of spots from where Ted started. He had a great stint, kept it clean for the most part, although was roughed up a bit on the opening laps. There are some things that are out of our control which hopefully we will get straight when we go to VIR, one of my home tracks. We’ve got two wins there, so I’m looking forward to going there in a couple of weeks.”

“Really on a positive note, I can’t say enough about the stops that we made. The TGM crew over the wall did a fantastic job. We just got hung up early on in the heat of the battle with a car we can’t really pass with performance-wise, so we’re doing a bit of a driving-in-formation drill in hopes that coming into pit lane, we can leapfrog those cars, and we did that. We got up as high as fourth. Matt was running in sixth, did a great job, just had a fuel reserve light come on at the end; we didn’t want to chance it so we had to come in but it set us way back. Thanks goes to Ted and Kristina Giovanis for putting this great team together and for the opportunity. This day was a bit of a setback, but we want to stay positive and look forward to VIR.”

“P11 in the race today. I don’t think anyone would necessarily be happy with P11, but we had a lot of challenges. We had quite a few issues during practice that we fought through. We came back, ran top five for a good part of the race. The guys did an amazing job on the pit stop; we came in ninth I think and came out in third. But we had some tough luck at the end with a fuel pickup problem and made an extra fuel stop just to make sure we didn’t have any problems running out of fuel. That’s just how our day was, certainly not the finish we were hoping for. But once again, the crew crushed it on pit stops, leapfrogging us each time we came in.”