Both TGM Chevrolet Camaros ran strongly for the first half of the race. After his stint, team owner/driver Ted Giovanis turned the No.64 Chevrolet Camaro over to co-driver Owen Trinkler.

The Nashville-based racer was making up ground when they experienced an unexpected mechanical failure which ended their race.

However disappointing, the sting of the DNF was soothed by the No.46 Camaro, which had been turned over from starting driver Hugh Plumb in first place, to his co-driver Matt Plumb.

Matt continued to dominate, holding onto the lead until the second-place car made a late-race attempted pass. The resulting contact relegated Plumb to 11th place, with only a few laps remaining.

“Although we are disappointed, this was a perfect day for the team to show the strength of the Chevy Camaros. The team was flawless on pit lane, planning strategy, and setting up the race cars,” said team owner Ted Giovanis.

“The driver who hit Matt came over to apologize to the team, and we appreciate that. We have to take the good from this weekend and move on to Watkins Glen in a few weeks.” 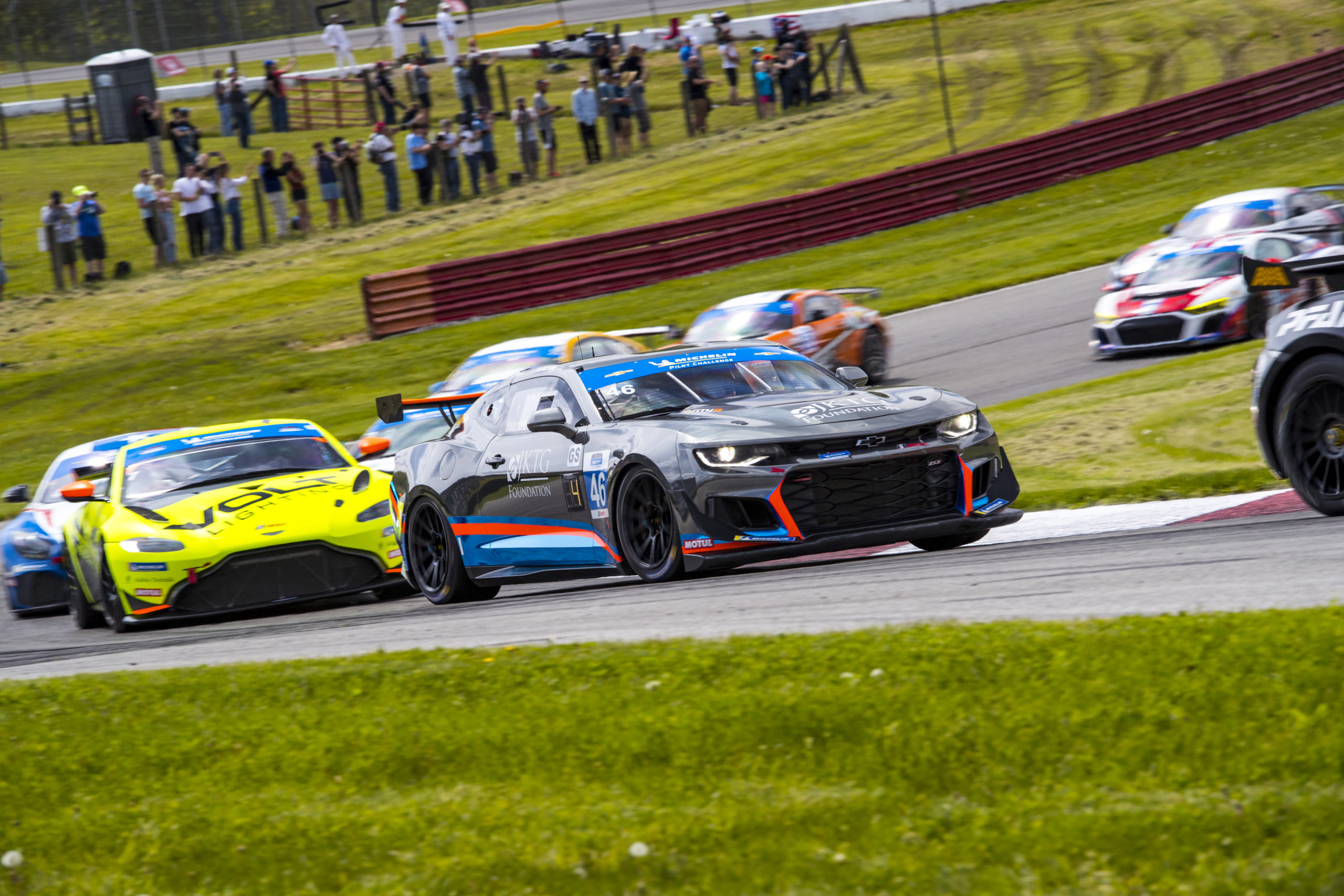 “It was good racing right up until the car had an issue. We fell back a bit, but we were in the process of making that up. The car was fast, which was all attributable to the setup.
“Owen was running just about a 10th of a second off of Matt’s time when we had to retire the car. “Matt was in the lead at the time and was the fastest car on the track.
“We learned a lot, we got the set up right, and I think the team feels confident we’re going to be a strong contender for podiums and wins going forward.”

“The #64 Team TGM Chevy Camaro GT4R had an up and down day. Ted ran some of the best laps that he’s done here at Mid-Ohio in the first part of the race, and then we had a little bit of a pit stop issue with some wheel spin which we are not allowed, so we served a drive-through penalty which set us back.
“But the car had excellent pace, and after I did ten laps or so, we started to smell something in the car, and we realized the rear diff was going out, so we were forced to retire the car.
“I’m happy with what we accomplished this weekend. We showed some good pace in the practice, so we’ll head to Watkins Glen, where we have a test scheduled, and we’ll be ready to go.”

“It was a tough day for sure, but that’s the way the sport goes.
“Our early race run was something the team needed right now. I feel we’re the best in this paddock, but we’ve had some unfortunate circumstances, or luck, whatever you want to call it.
“We brought the car into the pit in the lead, Matt did an awesome job, and as always, we were giving it to the best guy to bring it to the finish.
“I’m super proud of that effort, but a full course yellow we didn’t need bunched up the field, and after the restart, we got hit in the rear and sent back in the field.
“That’s the way it goes sometimes, but we keep our heads high and move onto the next race. As always, everyone on the team did a great job, and I’m thankful to Ted and Kristina Giovanis for all they give us and grateful to be a part of it.”

“We had a lot of potential today. As always, Team TGM does an amazing job of preparation. In our earlier trip here, despite the snow, we were able to find a very good setup, possibly the best handling car I may have ever driven in Michelin Pilot Challenge, and I hate for the other teams I’ve driven for to hear, but it was really spectacular.
“Balance was just right from the beginning to end. It was just one of those things. This is a very competitive field, and there are a lot of really good drivers, drivers that want to get by and I was definitely a bit of a sitting duck leading at that moment in time.
“Our car was really good in clean air and I think there were some folks conserving due to fuel strategy, then once that last yellow came I knew the chicken was cooked.
“I did my best to be defensive but with that comes the chance that someone might get impatient. It was unfortunate, the driver responsible apologized and there are no hard feelings. Looking forward to the next one at Watkins Glen.”