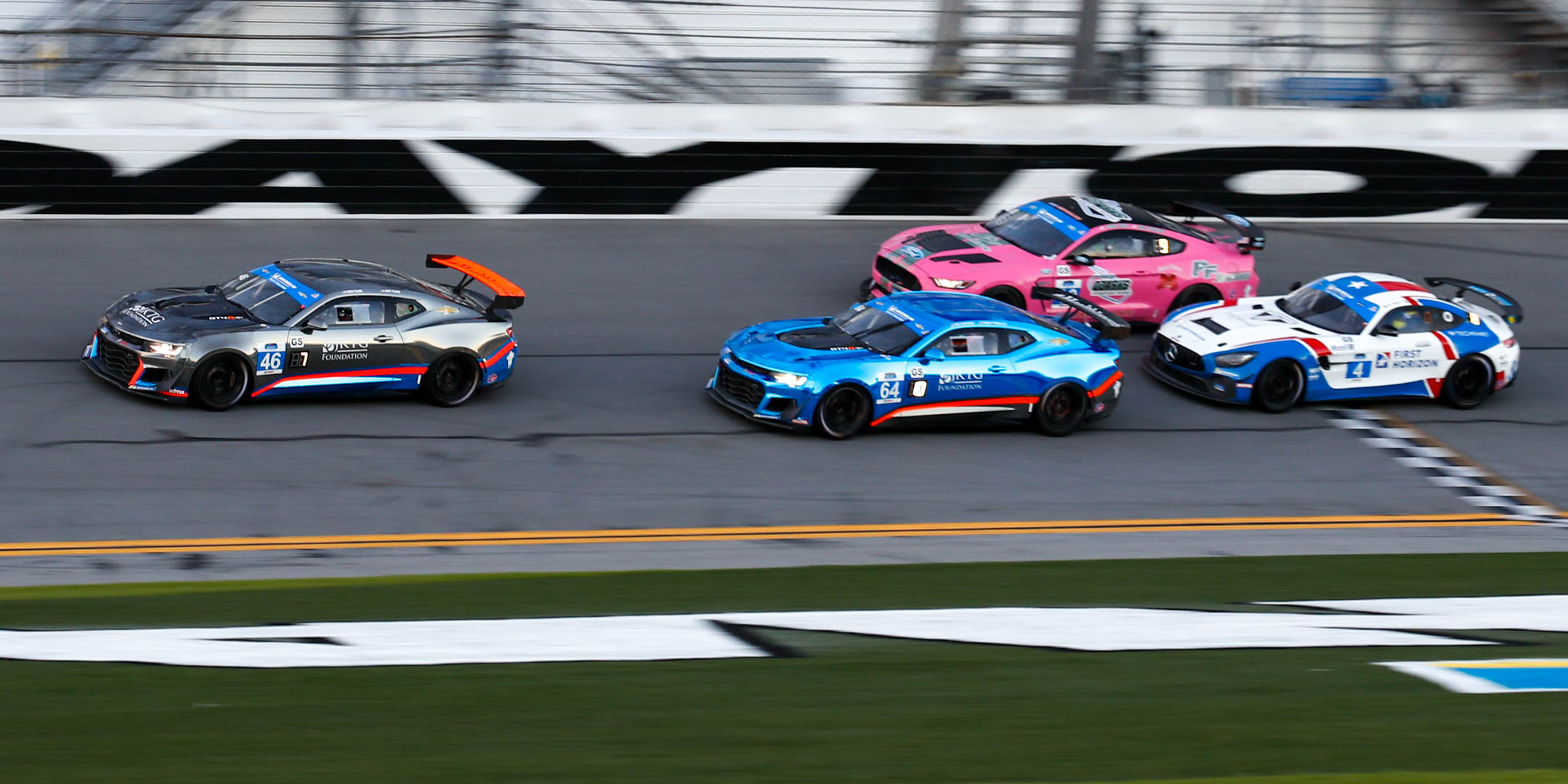 Today’s four-hour opening round of the championship provided the team with an emotional rollercoaster ride with Hugh and Matt Plumb finishing sixth aboard the No.46 Camaro. Meanwhile, the sister car No. 64 Camaro had rolled the dice on strategy and actually led the race with less than 20 minutes to go.

Unfortunately, a late visit to the pits to top-off for fuel pushed the No. 64 entry of Ted Giovanis, Owen Trinkler, and Hugh Plumb to the back of the lead lap in 21st position.

Team TGM has returned to the IMSA Michelin Pilot Challenge Championship in 2021 after electing to skip the majority of the 2020 COVID-19 disrupted season due to team owner Ted Giovanis’s commitments to medical research with the Jayne Koskinas Ted Giovanis Foundation for Health and Policy efforts.

However, the Chevrolet Camaro team demonstrated they had lost none of its competitiveness despite suffering a straight-line speed deficit on Daytona’s high banks.

Hugh Plumb fought back brilliantly in his opening stint aboard the No.46 car. He was forced to serve a drive-through penalty early in the race for a race start violation, but strong pace and good strategy from the team sent his brother Matt Plumb out into the lead early in his stint. 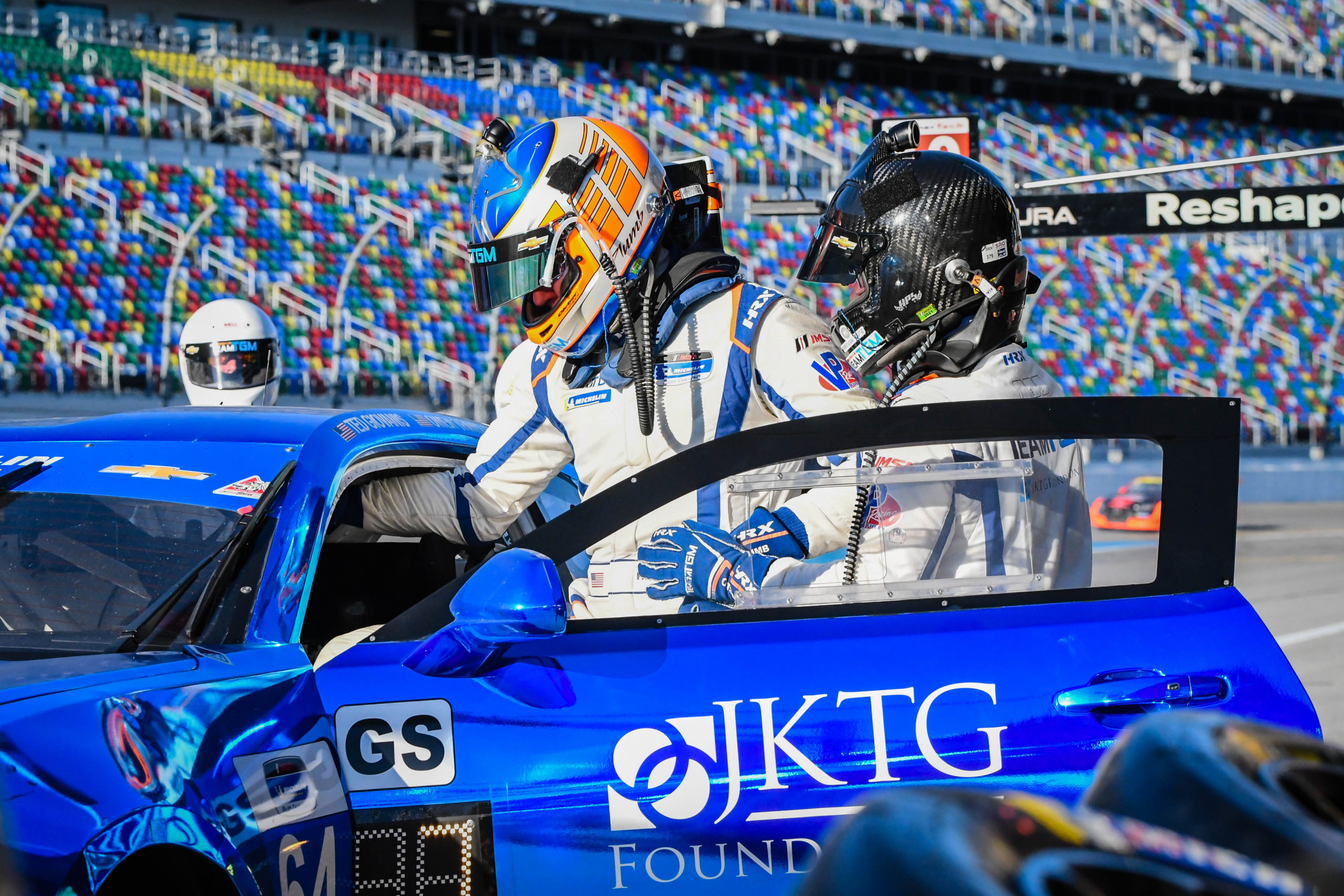 Ted Giovanis started the race aboard the No.64 before handing over to Owen Trinkler. The team rolled the dice on strategy as they juggled minimum and maximum driver time allocations – Hugh Plumb jumping on board to also complete the race in the blue Camaro.

With 20 minutes remaining, the No.64 car held the race lead as the competition resumed after a safety car. Plumb was in both tire and fuel conservation modes as he led the opening lap but eventually was forced to make one final stop for a splash of fuel to make the finish.

Giovanis, Trinkler and the two Plumb brothers will now set their sights on the Rolex 24 at Daytona tomorrow – the quartet combining to drive the team’s Porsche 911 GT3R in the opening round of the IMSA WeatherTech SportsCar Championship – the team’s debut in the premier North American sports car championship.

Aided by the support of Porsche experts Wright Motorsports, and with backing from Porsche Silver Spring – Team TGM will kick off its Rolex 24 at Daytona debut at 3:40 pm tomorrow.

“It was an excellent first showing back for Team TGM. We presented well and had both cars running at the front and leading the race at times today.
“Everybody drove well – Owen, Matt, and Hugh did a great job – we just have to regroup and think about what we need to do and move forward.
“Now we have to turn the page and set our sights on the Rolex 24. We have a bigger race ahead of us, and everyone is very excited about racing the Porsche in the GTD class for the first time.”

“It was certainly a day of contrasts for us. We had to gamble on the No.64 car and throw everything we could at it and hope for some more safety car laps there at the end to make it to the finish without that extra stop.
“The team was on point today and did a great job. I’m not going to complain about the BOP, but I think we’re in a tough spot right now. It is up to us to fix it, and good teams like this one move on and do great things with what we have.
“Matt drove awesome. Ted and Owen did a great job. We just didn’t have that outright speed today.”

“It was good to be back at Daytona in our first race together as a team in a year.
“I loved being back out there in the Michelin Pilot Challenge competition. We had one car in sixth, and we rolled the dice on the No.64. We led a bit at the end, but unfortunately, we had to make a late pit stop.
“But that’s just what we had to do. With the maximum drive time rules that IMSA has in place, I was in a tight box with my allowed time in the car. If I could have finished it out we may have been a bit better but that is just how it went today.”

“Looking back at it after the race, I actually think it couldn’t have gone better. Looking at the things we could control, I think the team executed great pit stops, the drivers did a great job, and the car was perfect – we had no issues at all.
“We probably finished a little bit better than what we should have.
“Now it’s time to get a good night’s sleep, stretch everything that is tight and come back tomorrow for the Rolex 24 at Daytona. We’re back to do it all over again. I’m super excited to do that race with TGM for the first time.”