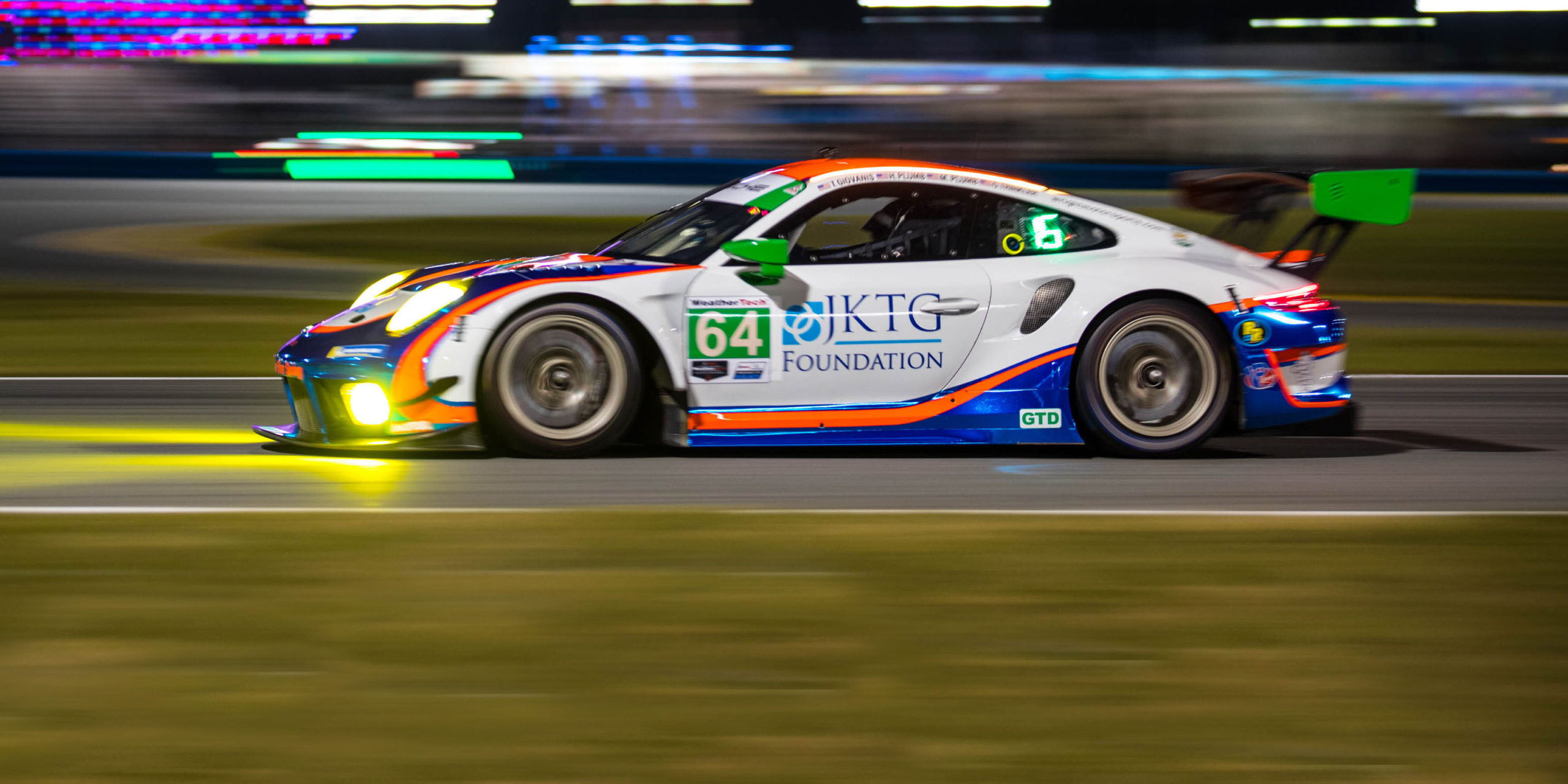 DAYTONA BEACH, FL. (Sunday, January 31, 2021) – Team TGM may have fallen short in its target of completing the “28 hours of Daytona” this weekend, but the championship-winning race team departs the “World Center of Racing” with great respect for the Rolex 24 at Daytona and a desire to potentially return for the event in the future.

Team TGM drivers Ted Giovanis, Hugh Plumb, Owen Trinkler, and Matt Plumb were tasked with completing “double duty” this weekend with the team launching its championship assault on the Michelin Pilot Challenge in its Chevrolet Camaros and also combined to debut as a team in the Rolex 24 at Daytona aboard a Porsche 911 GT3 R with the help of Wright Motorsports.

While every team and driver was out to “win a Rolex” this weekend by charging to victory lane in the 24-hour enduro, Team TGM’s initial goal was to earn a race finish and potentially score a top ten on debut in the highly competitive GT Daytona class.

After a trouble-free run for 18 of the 24 hours, Matt Plumb suffered drivetrain issues on Sunday morning – eventually sending the Porsche 911 GT3 R to the garage. Sadly the team’s debut came to an early end, with the drivetrain issue forcing them out of the race. 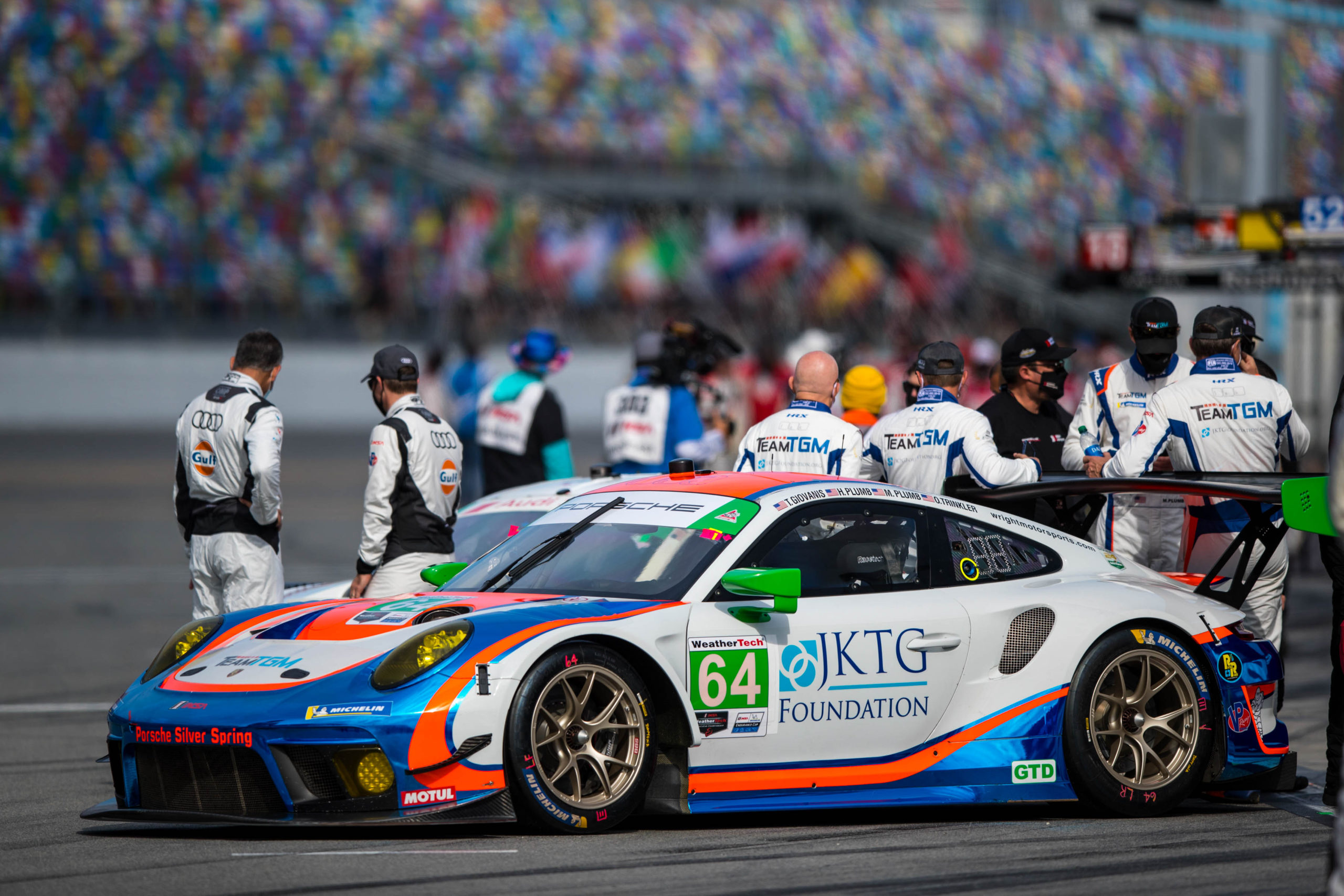 While disappointing, the result still gave all four drivers and the team a taste of what it was like to compete together in one of the toughest endurance races in the world. The team had joined forces with IMSA WeatherTech SportsCar Championship regulars Wright Motorsports who assisted Team TGM in its Rolex 24 debut – the TGM crew working side-by-side with the Wright squad to run the race from the Daytona pits.

Team TGM will now return to its full-time focus on the IMSA Michelin Pilot Challenge championship which resumes at Sebring International Raceway in March.

The 2021 season marks a return to competition for Team TGM who sat out most of the 2020 season due to team owner Ted Giovanis’s medical research commitments with the Jayne Koskinas Ted Giovanis Foundation for Health and Policy efforts.

“Making my Rolex 24 debut and taking our team to this race for the first time was certainly a great experience. I tried as much as I could to understand the task ahead of us and try not to underestimate what we were about to undertake.
“We learned a lot about the race and the car. We had the right team, the right spotter, the right drivers – all in all, we were working our way through it.
“I learned about the physical challenges of the race and now understand I need to be in a little bit better physical shape if we do this again.
“The result was disappointing, we wanted to get through it, but overall, it was the best experience I have had in racing.
“It was like when I ran my first marathon – it was the biggest grueling thing I had ever done before. But I ran another one.
“You learn from it and it is all about the challenge of it all.

“Firstly, I have to thank Ted Giovanis for entrusting us with what we put together here. This idea was launched about a year ago, and Ted and I have been through thick and thin as co-drivers, trusting me to help him find his groove in endurance racing.
“He recently won his first championship, and I can’t be more proud of him with everything he has achieved.
“This was a big goal that we set our sights on last year. We did everything right from a team perspective and made all the right decisions on the people we have plugged in for this weekend.
“From crew to the guys on the box like Michael Colucci, Joe Varde, and John Terry who called the shots they all did an amazing job.”

“I am very grateful to Ted for the opportunities we’ve had this weekend. We’re bummed a little bit that we didn’t get to finish the Rolex 24.
“This was Ted’s first experience here, and it was great to work with Wright Motorsports and guys like Michael Colucci, who must have about 40 of these races under his belt.
“We showed some great speed at times in a couple of practices, which showed to Ted that he has the right guys in his organization at Team TGM and those who helped us this weekend – everyone worked so well together.
“It was a good experience and hopefully, we’ll be back next year.”

“This was the longest 24 hours that we haven’t finished. This was a commendable job by all the guys at Wright Motorsports and Team TGM.
“There were so many firsts we had to experience. It was Ted’s first Rolex 24 at Daytona; this was our first time as a team tackling the event and our first time running this car.
“Everyone just executed perfectly. It is always a pleasure to be with this crew of drivers. It’s comfortable and just works well.
“Wright Motorsports as always performs and does the job that everybody knows they can do.
“They are an incredible organization that allowed us to plug in with our guys and tackled all those ‘firsts’ so well.